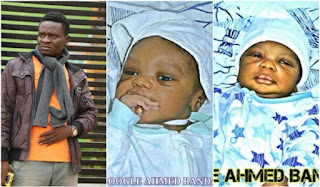 Kumawood producer and director, Francis Dzogbetsi popularly known Nebu Ur’ Majesty has shocked fans and caused a stir on social media after he named his 3-week old son after the world’s largest search engine, Google.

During the naming ceremony of the 21-day old cute boy, Francis decided to name his son after Google.
He went on to christen his son, Google Ahmed Banda to the admiration of all the well-wishers and family members who were at the gathering.

Many people have reacted to the name as it has started gaining attention on social media.
Some people argued that even Americans had not named their children after the search engine.
Posted by Unknown
Labels: CelebrityGist