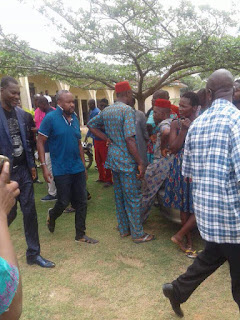 The suspected leader of a gang known as the "Great Men" Mr. Chinedu Akpunonu (AKA Obrocho) that allegedly masterminded the shooting in St. Philips Catholic Church, Ozubulu, has opened up to his counsel Okechukwu Ikenna and narrated how the shooting was carried out in Ozubulu.

Recently, the Anambra State Police Command paraded four suspected members of a deadly gang (The Great Men) including their leader Mr. Chinedu Akpunonu (AKA Obrocho) who confessed to have masterminded the Ozubulu massacre that had 13 people killed and about 22 injured on August 6.

Chinedu who further confessed to have never sent his boys to attack the St. Philips Catholic Church that led to the shooting of the congregations said: "our target was Bishop, I sent my boys to get me bishop, and when they went to his house and could not find him, they decided to check him in the church and after they realized Bishop had left the country back to South Africa they resorted to killing members of his family which resulted the careless shooting in the church.

One of the suspects, 44-year-old Vincent Ike condemned the killing and disassociated himself saying it wasn't in their plan but the boys overreacted.
Posted by Unknown
Labels: Crime