Four Bullet-proof Vehicles Hidden In A House In Ikoyi Seized By Customs. (Photo) 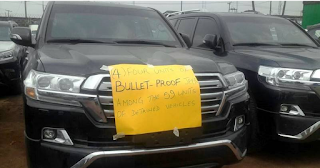 Four bullet-proof vehicles have been impounded by officers of the Nigeria Customs Service, from a house in Ikoyi, Lagos. According to Mohammed Garba, the Customs Area Controller, the operation was carried out based on intelligence reports and ownership of the vehicles remains a mystery as nobody has come forward to claim the vehicles.

According to reports, other similar vehicles were also seized from car parks around Lagos.
Mohammed Garba, told reporters during parade of the seized vehicles;
“Our operatives trailed and evacuated 59 assorted vehicles from car marts in Ikoyi among of which over 40 are 2017 models ranging from Toyota Prado Jeeps, Lexus Jeeps, Toyota Hilux, Toyota Camry, Coaster Bus, Toyota Hiace Bus among others currently under detention awaiting relevant customs document from the dealers within a grace of one month,”.

“Some are even bullet-proof which require End User Certificates from the Office of the National Security Adviser, NSA.
“We removed these (Bullet Proof) vehicles from a hidden house in Ikoyi while others were gotten from a car park in FESTAC.
“Investigation will reveal further those behind the clearance of these vehicles and (they) must face the full wrath of the law.”
Posted by Unknown
Labels: Crime