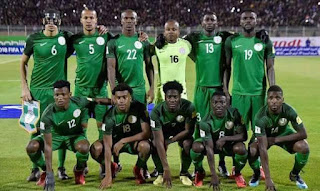 The CIES Football Observatory is a research group founded in 1995 by FIFA in partnership with the canton and town of Neuchâtel in Switzerland.

World Cup champions Germany emerged as the second country that had the youngest squad, while England were third.

A statement on FIFA’s website reads: “The CIES Football Observatory and FIFA have joined forces to analyse the profiles of the players who were fielded by the 32 qualified teams on the road to Russia. The analysis highlights the diversity of the squads in terms of both age and height, as well as the importance of migration with almost two thirds of players currently playing for clubs outside of the association they represent.

“There were also considerable differences among the teams in terms of the average height of players. At one extreme, seven associations fielded players with an average height of less than 180cm: Peru, Argentina and Uruguay (CONMEBOL), Saudi Arabia and Japan (AFC), Mexico (CONCACAF), and Spain (UEFA). At the other extreme, the average height of the players fielded by four European nations – Iceland, Denmark, Sweden and Serbia – was at least 185cm.
“The study also revealed that about 9% of players were born outside of the association they represent. Only seven of the 32 teams did not field any players born abroad. The number of footballers playing for clubs outside of the association they represent also revealed the importance of migration in football. In total, 64.6% of footballers play abroad: from 0% for England and Saudi Arabia, to 100% for Croatia, Sweden and Iceland.”

The Super Eagles who are in Pot 4, will know their group stage opponents when the draw for the 2018 FIFA World Cup holds on Friday, December 1st, in Russia
Posted by Unknown
Labels: Sports