A+ A-
Print Email
Belatedly constitutes Committee to probe death 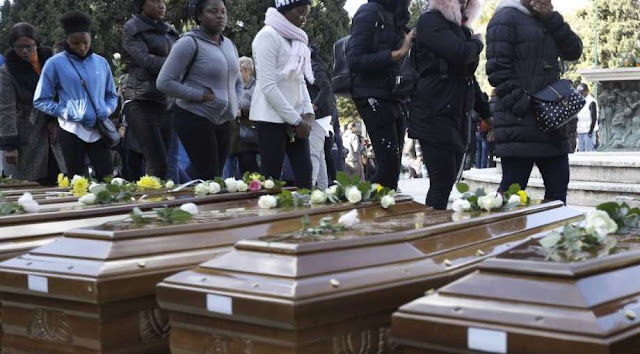 The federal govern was absent on Friday as Italy held a mass funeral on Friday for 26 young Nigerian women who drowned while trying to cross the Mediterranean Sea early this month.
But sources have revealed that the government has constituted a ministerial committee to unravel the circumstances which led to the death of 26 teenage Nigerian migrant girls.
A Roman Catholic bishop and a Muslim imam both said prayers at the simple ceremony in the southern city of Salerno, with 26 wooden coffins laid out on a stone dais. A single white rose was placed on the lid of each.
Just two of the women were identified.
“It is very likely that these girls were victims of trafficking for sexual exploitation,” said Federico Soda, director UN migration agency IOM for the Mediterranean.
A recent IOM report had estimated that 80 percent of Nigerian girls arriving in Italy by sea might be trafficking victims.
The 26 bodies were retrieved from the sea on November 3 by a Spanish rescue ship, while some 64 people were unaccounted for and feared lost, bringing the total dead to around 90, said Flavio Di Giacomo, an IOM spokesman.
Survivors found on nearby rubber boats said the women were all Nigerian and had left Libya hoping to make it to Italy.
The only two identified were named as Marian Shaka, who was married, and Osato Osaro. Both were pregnant. Some of those who died were believed to have been as young as 14.
Almost 115,000 migrants, mainly African men, have reached Italy so far this year, according to government data released on Friday, against just over 167,000 in the same period last year.
IOM said at least 2,925 people died trying to cross the Mediterranean from January 1 to November 5 as against 4,302 last year.
The Italian government has worked with Libyan authorities to block migrants from leaving the North African state, leading to a sharp fall in new arrivals since the summer.
The government says its policy has cut the number of sea deaths, while critics say it has left thousands of refugees and migrants trapped in appalling conditions in Libya.
Meanwhile, a presidential source has in reaction to allegations that the Nigerian government was indifferent to the mysterious death of the girls perceived to have drowned in the sea, disclosed that a probe panel has been set up on the matter.
According to the source, the Ministry of Foreign Affairs has been following the issue since it became public knowledge and equally updates the presidency on the matter on a regular basis.
The source also said the committee has the responsibility to study reports on the alleged sale of some Nigerian citizens into slavery and report its findings to the Federal Executive Council next week.
The committee is chaired by the Attorney-General of the Federation (AGF) and Justice Minister, Abubakar Malami.
Other members of the committee are the Minister of Foreign Affairs, Geoffrey Onyema, Minister of Women Affairs, Aisha Alhassan, Minister of Youths and Sports, Solomon Dalung and Senior Special Assistant to the President on Diaspora Matters, Abike Dabiri-Erewa.
Malam Garba Shehu, Senior Special Assistant to the President on Media and Publicity, confirm the constitution of the committee to journalists.
The funeral of the 26 female migrants who died at the Mediterranean Sea held on Friday in Naples, Italy.
Italian prosecutors say they are investigating the deaths of women – most of them teenagers – whose bodies were recovered at sea on November 6.
Investigators suspect that the women, aged 14 to 18 years, were sexually abused and subsequently murdered while trying to cross the Mediterranean.