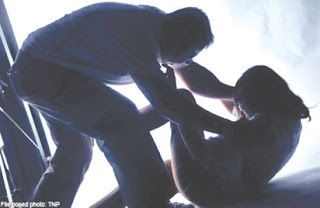 Tope, a father of six children, took to his heels after learning that the Police are after him.
The suspect was said to have told his wife’s sales girl to serve him a sachet of water in his room at a house located at Agbangudu in Ijero-Ekiti last week Monday.

The victim, who narrated her ordeal, said: “It was a Monday afternoon. I was in the shop when he (Tope) called me to bring ‘Pure Water’ to his room. He has been alone throughout the weekend. I never knew he had such plan in mind. “After giving him the sachet water I was about moving out when he (Tope) suddenly grabbed me. I tried to resist but he was more powerful than me. “He pushed me to the bed and covered my mouth with a pillow.
I tried to shout so that other tenants around could come to my aid, but nobody heard my voice.” She said the victim forcefully had his way and ended up defiling her. She observed blood stains all over her panties.

Few days after the incident, the wife of the suspect came back from Lagos and was informed of the incident. She was initially arrested by the Police in Ijero-Ekiti, but later released due to her current condition.

The victim has been taken to the hospital while the suspect is no where to be found.
Posted by Cheta Igbokwe
Labels: Gist