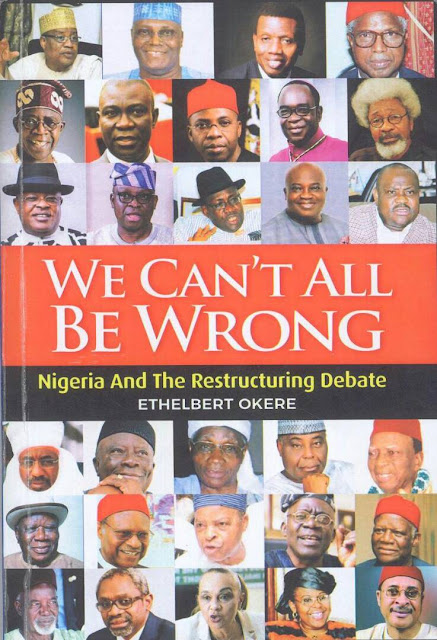 After what looked like a lull, a new book by veteran journalist and writer, Ethelbert Okere, has re-invigorated the debate on the political restructuring of Nigeria. The  explosive book, entitled, "WE CAN’T ALL BE WRONG (Nigeria And The Restructuring Debate)” will be unveiled on November 21, 2017 in Abuja.

The nearly 300 – page book which has thirteen chapters, is bound to stir another wave of controversy as the award-winning author in his characteristic style makes what may turn out to be the first and most incisive interrogation of the subject (of restructuring) so far.

The book, however, features issues that predate the current debate. For example, the author gives a historical account of past agitations for restructuring and responses by successive administrations.

However, the author makes a distinction between past agitations (and restructuring exercises) and the current clamour. He notes that “one big difference is that unlike previous agitations… Nigerians are for the first time proactively canvassing for a restructuring of the country within the context of a democratic liberty of freedom of expression and association. Minus the restructuring exercise that led to the creation of the defunct Midwest region, all previous restructuring exercises were carried out under the ambience of  military dispensations and were essentially lacking in the inputs of the people, themselves”.

Another major difference, Okere points out, “… is that whereas previous exercises were only concerned with creation of states or regions, the current agitation goes beyond just that. Today, the issue is not just about state or region creation.

Although there is the thinking in some quarters that restructuring means returning to the old format of regions, rather than the current sate structure, … what Nigerians are worried about … is the over concentration of power at the central (federal) government. 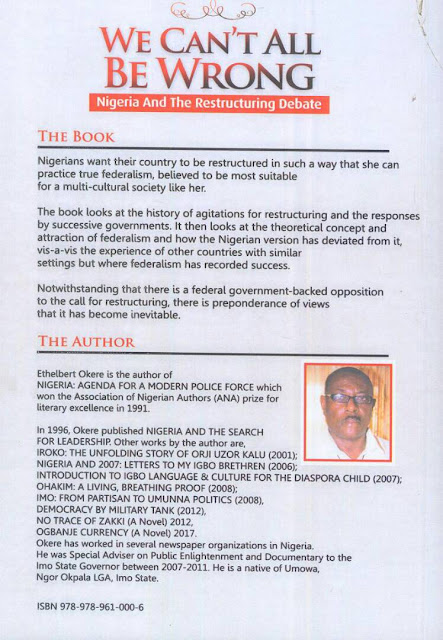 The author has strong words for those Nigerian leaders who are anti restructuring, especially those who argue that the call for restructuring is the same thing as asking for the disintegration of Nigeria. One of such leaders is former president, Olusegun  Obasanjo, who has been quite vehement in his opposition to restructuring.  But Okere has some words for him.

In chapter ten, the author, writing under the subtitle "Obasanjo’s War War Polemics”, argues that “agreed that Obasanjo, like his every other Nigerian, is entitled to his own opinion, but the way and manner he is going about his opposition to restructuring  suggests that, being a beneficiary of the current arrangement, he is doing so for selfish reasons”.

Okere further notes as follows: “… Obasanjo’s tendency to make “secession” and “restructuring” to mean one and the same thing at once smacks of deliberate mischief … to lump the call by well meaning and highly regarded Nigerians for restructuring together with the talk about secession by a few … young men asking for Biafra, is a blackmail on the entire…”

Okere argues that Chief Obasanjo’s opposition to restructuring is a latter day matter, because, according to him, Obasanjo had in 2005 convoked a national conference which he tagged “the National Political Reforms Conference” but which, Okere still points out, ended in a fiasco.

He writes: "But even with the failure of the 2005 national conference, it exists as an evidence to prove that Obasanjo’s opposition to restructuring is an afterthought. First, the 2005 conference was officially tagged the "National Political Reform Conference” (NPRC).
Okere then notes: “If we substitute the word, “Reform” with “Restructuring” – both of which broadly mean the same thing – then it is reasonable to argue that Obasanjo may well have had restructuring in his mind in convoking the 2005 conference.

He was specific on the choice of appellation for the conference, National Political Reform Conference, the catch word here being “Reform”. So, what did he want to reform if everything was fine in the country as he now claims?”

Two other prominent Nigerians who are anti restructuring and who Okere engaged in his book are the current Attorney-General and Minister of Justice, Abubakar Malami. Writing under the subtitle “Abubakar Malami’s “Provocative Rhetoric” in chapter Ten, the author finds holes in the Minister’s statement sometime ago where he described the advocacy for restructuring as a “provocative rhetoric”.

Malami had argued that Nigerians should use what he had termed “democratic means to reform our federal system”. But Okere, an ANA (Association of Nigerian Authors) prize winner, has the following posers for the Minister: “what else constitutes democratic means… other than that Nigerians are invoking their democratic liberty of expression to demand for a review of how they would relate to each other?Malami’s allusion to democratic means is superfluous because the democratic means are already here”
The chapter also features a critique of Governor El-Rufai’s current posturing on restructuring.

Mallam El-Rufai, the incumbent governor of Kaduna State, is one of those who have been arguing against restructuring and calling those advocating for it as “opportunists”.

This posture is, however, contrary to his earlier one, and Okere, writing under the subtitle, “El-Rufai’s Back And Forth”, points this out in his book. But he is not alone. Okere brought in the views of other Nigerians on El-Rufai’s current stance on restructuring.

For example, he quotes constitutional lawyer and human rights activist, Femi Falana, as having made  following remarks on El-Rufai: "Although the governor may now call Alhaji Atiku Abubakar names for supporting the call for restructuring, it is on record that both of them had no fundamental disagreement on the restructuring of the national economy ... Both Alhaji Abubakar and Mr El-Rufai were chairman and Director General, respectively, of the Bureau for Public Enterprise … On the basis of his consistent campaign for restructuring of the economy through privatization, it is him, El-Rufai, who has displayed unbridled opportunism  and irresponsibility in the on-going debate for political restructuring”.

Other chapters of the book include, The APC Dilemma (chapter eleven); Is Restructuring A Southern Agenda (chapter twelve) Restructuring or Constitutional Amendment (chapter thirteen) and, The “Mistake” At The National Assembly (chapter fourteen).

The media is not left out. The book, under chapter fifteen, contains editorial opinion of notable newspapers in the country on the issue of restructuring. Some of the newspapers whose editorials are featured in the book are the Guardian, the Nation, the Sun, the Punch and the Tribune.

In all respect, “We Can’t All Be Wrong” is a must read.An inkling of the nature and trajectory of the book can be gleaned from the caliber of persons that are billed to officiate at the public presentation on November 21, 2017. Erudite scholar and clergy man, Bishop Matthew  Kukah will chair the occasion; the deputy   president of the Nigerian senate, Dr Ike Ekweremadu, will deliver the key note address while former vice president, Atiku Abubakar will be the special guest of honour. Renowned journalist and former presidential spokesman, Dr. Reuben Abati, will review the book at the occasion.
Posted by IfeanyiCy Njoku
Labels: Feature