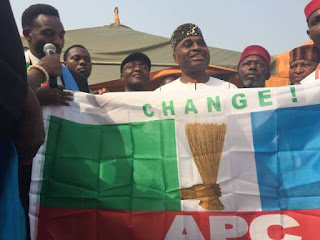 Recall that in a letter to the Governor dated 12th October, 2017, the APC leader in Nsukka LGA, Nollywood Actor Kenneth Okonkwo, alerted the public that the Local Government Election in Enugu State was a ruse.He revealed that the results had already been written, waiting to be announced.

According to our  source, the Governor, was afraid of instant defeat in Nsukka LGA by the APC, and therefore ensured that result sheets were not distributed as at 2pm on November 4th, 2017, the day of the election, prompting the APC in Nsukka Local Government to withdraw from the election.

The election was also marred by thuggery and violence our source continued. The former Gubernatorial Candidate of APC, Mr Okey Ezea, escaped being lynched with serious injuries. The Chairmanship candidate of APGA in Nsukka LGA, was battered and bruised prompting the Police command in Nsukka to issue directives to bring the culprits to book With the result sheets, no where to be found on election day, the election is deemed indeed by many to be a ruse.
Posted by Unknown
Labels: Politics