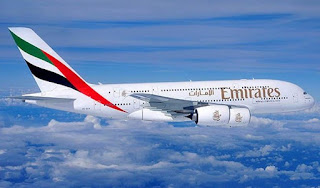 Emirates Airlines yesterday said it would reinstate its second daily service to Lagos and resume operations to Abuja with four weekly flights from December 15, 2017.

Similar to the current daily service between Dubai and Lagos, the added frequencies to Lagos will be operated with Emirates’ Boeing 777-300ER aircraft which has eight private suites in First Class, 42 lie-flat seats in Business Class and 310 Economy seats.
The airline which operated 18 frequencies to the country including two daily flights to Lagos and four weekly flights to Abuja reduced the frequencies to seven in October last year.
Posted by Cheta Igbokwe
Labels: News