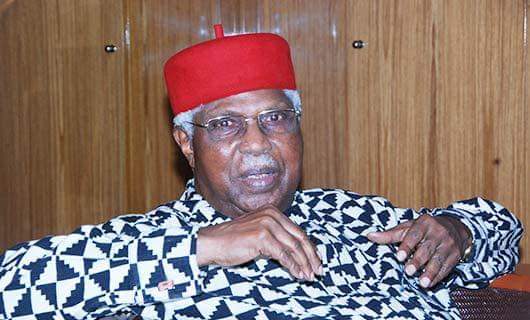 A former governor of Imo state ,Ikedi Ohakim ,has described the death of the second republic vice president, Alex Ekwueme, as a sun set for the African continent.

In a brief statement he personally signed in Owerri, on Monday ,Ohakim,stated that the demise of the elder statesman was an "end of an era".

He said that the ex vice president would be remembered for upholding peace ,honesty, brilliance, love and unity.

The ex governor ,while lamenting that Nigeria ,especially the South East would miss the octogenarian, he maintained that, Ekwueme ,died of time when his service and wisdom were needed for the development of the country.

The statement read "The news of the death of former Vice  President, Chief Dr Alex Ekwueme, in a London hospital came to me on Monday morning. I have been in mournful mood since the news broke to me.

It is true that no father wishes to stay alive to bury his children. It is also true that God had blessed Dr Ekwueme with long life and he achieved so much for himself, Ndigbo, Nigeria and Africa at large. And though there is no good time for dying, the former Vice President died at a time his wisdom was still very much needed.

While the entire Igbo nation and Nigeria continue to grief over his death, I extend my condolence to his immediate family and pray God to give us the fortitude to bear this irreparable loss.

Though his death marks the end of an era, we should realise the huge task left for the living to continue to uphold the peace, honesty, brilliance, love and unity, being virtues he was known for.

May the soul of the departed elder statesman and multiple professional rest in peace".
Posted by IfeanyiCy Njoku
Labels: News.