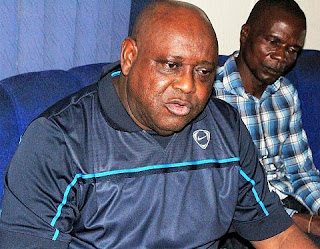 The Economic and Financial Crimes Commission(EFCC) on November 27, 2017, arraigned the duo of John Zino and Festus Otoigiaghae before Justice Josephine Oyefeso of the Lagos State High Court sitting in Ikeja on a three-count charge bordering on conspiracy, obtaining by false pretence and impersonation to the tune of N1m (One Million Naira).

The petitioner, Victor Adoji, an employee of Zenith Bank Plc, alleged that the first defendant, Zino, told him that there was a "stinking petition" against him with the Commission for keeping foreign currencies at home.

Sixty-two-year-old Zino, who claimed to be a lawyer with the Commission, also allegedly requested $100, 000.00 USD(One Hundred Thousand United States Dollars) from Adoji for him to “settle EFCC boys in order to be given soft landing".

The first defendant also allegedly admitted to have met the second defendant, Otoigiaghae, who wrote the petition against Adoji, through a church member.

The petitioner(Adoji) who suspected a foul play, was said to have approached the Commission, where he was told to play along with the accused.

The accused were eventually arrested in a sting operation by operatives of the Commission.The accused persons pleaded not guilty when the charge was read to them.

In view of their pleas, the prosecution counsel, Zainab Ettu, asked for a trial date and prayed the court to remand the accused persons in prison custody.

Consequently, Justice Oyefeso ordered the accused persons to be remanded in prison custody and adjourned the case to December 18, 2017, for the hearing of the bail application and February 27, 2018, for commencement of trial.
Posted by Unknown
Labels: Crime