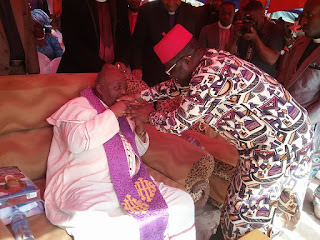 In what seems like a drama which lasted for about 45Minutes, the Founder/ President of Christ Ascension Church Nigeria/Oversees, Prof O. N. Godwin who was in Umuakpa for the burial of one of his faithful and dedicated church members, Late Deaconess Lydia Njoku was overjoyed to have met with the Ebonyi State Governor, Chief Engr. Dr. David Nweze Umahi. He expressed his happiness over the massive developments going on in the state courtesy of the governor. His display and shows of love to the governor got everyone in the event thinking. 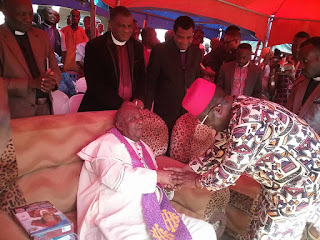 It was dramatic, he held on the governor for minutes while asseverating numerous blessings on the governor. His agape love showed was no more hidden as he severally kissed the hand of the governor in excitement of whom the governor is and what he is doing in the state.
The governor while addressing the numerous audience in the event got paused for a while and digressed to what he called a directive of the spirit. He announced a building of an outstanding/uncommon structure for the Almighty God in the community for the Christ Ascension Church and another for the neighboring church which is the Assemblies of God Church. In his words, he assured the two churches which he has received directives from God that the places of worship of God will spring up before the climax of next year. 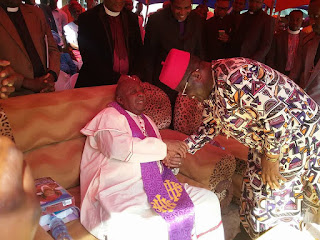 Earlier, the governor noted that he has been blessed beyond mark for doing the things of the Lord. He emphasised on the numerous benefits he has gotten for sacrificing the building of his own house to the building of a Church in Abakaliki. During the period he was building the house of God in Abakaliki, he ensured that the standard, quality and model superseded that which he is using for his own house.

Governor David Nweze Umahi announced to the public that he has forgiven those that wronged him, those that burnt his house for one political reason or the other, those that called him names for what he knows nothing about. He said that the burning down of his house was a blessing in disguise as God who watches every man's heart has already replaced the structures in numerous folds.
Posted by Unknown
Labels: Politics