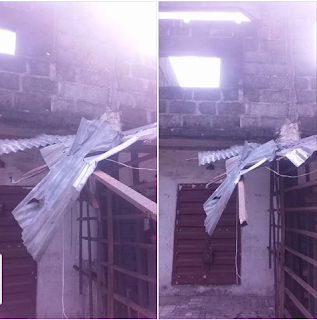 According to reports, a one-storey building located at Owumi Road, directly Opposite Concord Supermarket in Sapele area of Delta state yesterday fell on top a deaf boy. The deaf boy is said to have a shoemaking workshop at the bottom of the affected building.

According to an eyewitness, trouble was said to have started when the rain accompanied by fears wind began yesterday. The deaf was attending to a customer when the upstairs began to vibrate, the customer was fast enough to run out, but the deaf was trapped and covered by blocks that fell from a part of the building, it took the joint effort of passersby and neighbors who helped to removed the blocks from him, but before then he had already sustained a wide injury on his four head, due to the impact of the blocks and dislocation on his waste to leg region.

He was immediately rushed to a Hospital.