Branch of Access Bank in Lagos gutted by fire 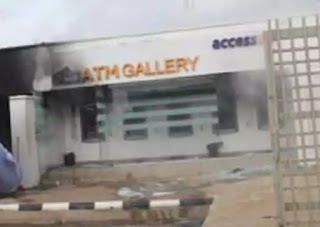 A branch of Access Bank in Ikotun Lagos State was gutted by fire on Tuesday, destroying the Automated Teller Machines gallery on the bank premises.


It was learnt that the fire sparked off around 4 pm from a faulty air conditioner at the gallery and spread to the machines.


The fire reportedly raged for about three hours before it was put out by officials of the Lagos State Fire Service mobilised to the bank.


The fire service director, Mr Rasaq Fadipe, who confirmed the incident, said two fire trucks were deployed in the area.

He said his men were able to prevent the fire from spreading to the other parts of the bank.

He said, “The fire affected the batteries and inverters of the ATMs, numbering about six. The place was heavily smoke-logged and we had to use a forklift and other apparatus to gain access to put out the fire. The batteries are about 200 voltages each.”

An official of Access Bank, who did not want his name in print, said the fire emanated from a malfunctioning AC in the gallery.

He, however, said the ATM vaults, containing cash were not affected by the inferno.

The official said, “The fire affects only the ATM gallery. One of the ACs in the gallery malfunctioned and caught fire. I don’t have details yet, but everything has been brought under control.”