Menu
Home » Feature » BETWEEN GOVERNOR OKOROCHA AND THE POOR IN IMO

BETWEEN GOVERNOR OKOROCHA AND THE POOR IN IMO 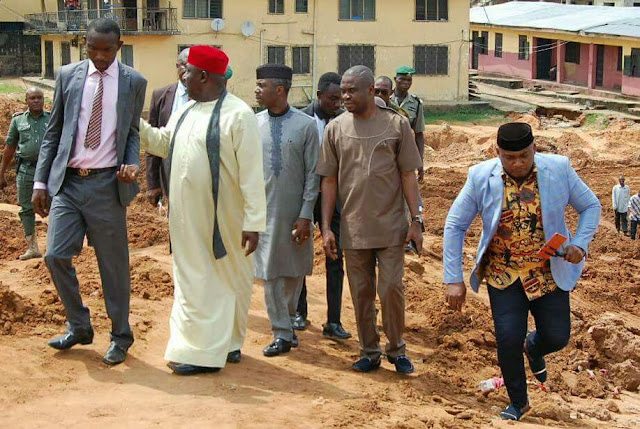 I was a discussant with one of Governor Okorocha's die-hard supporters and commissioner nominee, Prof Nnamdi Obiareri, Hon Barr Uche Onyeagucha and Prof Protus Nathan Uzoma on Saturday November 11, 2017. The event was the 5th anniversary of  Imo Youths for Positive Change held at the Mega 1 Event Place, Akanchawa Road, Concorde Area, Owerri. The event comprised of public lecture and discussion segments, where we  discussed "Integrated State Development: A Comparative Analysis of Sam Mbakwe Era and Post Mbakwe Period - The Quo Vadis".

It was an interesting moment, and it was time for the politicians on the panel to engage in unnecessary adulation and make some baseless claims. It was therefore shocking to many of us to hear from Prof Nnamdi Oboareri that Governor Okorocha loves the poor.

Governor Okorocha rode on the back of the poor to become Governor in 2011. He went to the markets and spoke to them. He hugged them. He bought akara from roadside and ate. He bought roasted corn by the roadside and ate. He rode on keke. He drove himself in his car and beamed with smile as he shook hands with all and sundry. He associated himself with the poor and they accepted him like one of them. He called them " my people, my people" and they answered "our Governor, our Governor". But many years down the line it has become clear to the poor that their judgment of 2011 was wrong, that they made a mistake.

But according to Professor Obiareri, Governor Okorocha is the only Governor in Imo State that loves the poor and has picked his appointees from their rank. He claimed that Governor Okorocha picks nobodies and makes them somebodies by virtue of his appointing them into office. He went on to claim that Governor Okorocha has produced a Senator in the person of Senator Benjamin Uwajumogu who was Speaker of Imo State Assembly. He also mentioned Hon Chike Okeafor who is now a member of the House of Representatives after serving as Okorocha's Commissioner for Finance. Before he ended his talk he mentioned how he was denied the ticket to go to the Senate under the PDP, lamenting that the PDP gave their ticket to someone he considered himself better.

It is imperative to point out that when you listen to Prof Obiareri speak against the PDP and their governments, you would see someone that has bitterness and malice for the party and all they stand for. This malice and bitterness have gone deep that the Prof cannot see any good in the PDP that he served for many years. As far as he is concerned the PDP is not a good party and their governors did not do well because he was denied the opportunity to go to the Senate. It therefore means expecting too much if we want him to speak objectively of the PDP era and anything the party stands for, not now he is still a serving member of the Okorocha's government.

Take cognisance of the fact that we had on the panel at the event mentioned earlier two opposite personalities: Hon Barr Uche Onyeagucha who was singing all the praises for Okorocha's government while he was serving as special adviser to the Governor, but now that he is no longer in government he has taken over the job of the opposition and has become critical of the Governor. He has even joined the opposition All Progressives Grand Alliance (APGA) and he is being praised in the opposition camp as a dogged fighter. This is one of the ironies of our political culture. We also had Prof Obiareri who said we should not mind Hon Onyeagucha because he was angry with the Governor, not on principle, but because he could not realise his governorship ambition as he hoped. Therefore, it is not far fetched that even Prof Obiareri who has been speaking loftily of the Okorocha's government might be doing so because his interests are still being protected in the government. His views might change and he could become very critical of the Governor the day his interest is no longer protected.

The point really is that Governor Okorocha is anti the poor. If someone under the Okorocha administration had the opportunity to go to the Senate or anywhere else, it is really nothing new and cannot be seen as being pro poor. If for example, former Deputy Governor Engr Ebere Udeagu, like Prof Obiareri claimed, has not climbed higher politically, it cannot be said to be either his fault or that of the PDP. After all, there are countless deputy governors in Nigeria that have not climbed higher. It's all about opportunity. That Goodluck Jonathan became Governor, Vice President, Acting President and then President after he was Deputy Governor is not ground to even think that any deputy governor who has not done same is a failure, or that the party is a failure. Was Sir Jude Agbaso not the first deputy governor to Okorocha and he was impeached? If Prof Obiareri believes that deputy governors should climb higher in their political career, he should ask Governor Okorocha to anoint his Deputy, Prince Eze Madumere, to succeed him in 2019.

That the PDP did not give Prof Obiareri the ticket to go to Senate does not mean the party did not give anyone else that ticket. And of course, the PDP has produced giants in Imo politics, outside their governors. The PDP produced Senator Chris Anyanwu who helped make Okorocha Governor. The PDP produced Rt Hon Emeka Ihedioha who rose to become the Deputy Speaker and Acting Speaker of the Federal House of Reps. The PDP produced Senator Hope Uzodimma, Senator Osita Izunaso, Senator SamDaddy Anyanwu who started as local government chairman. The PDP produced Hon Gerald Irona who was council chairman, state assembly member and later member of House of Reps. Hon Chukwudi Mayor Eze is also a product of the PDP. He started as the Executive Chairman of Orlu LGA, became ALGON Chairman, ALGON National Vice Chairman and later member of the House of Reps. Today he is running for governor in 2019. The PDP produced Rt Hon Goodluck Nana Opiah who rose from being the Speaker of Imo State House of Assembly to being a member of the Federal House of Reps; Hon ThabkGod Ezeani, Hon Jerry Alagbaso, Hon Bede Eke, Hon Obinna Onwubuariri and Hon Bethel Amadi. The list is endless, notwithstanding the appointees of the PDP at the federal and state levels.

Prof Obiareri who is also a product of the PDP had also claimed that Governor Okorocha's free education is a pro poor policy that could change the future of the state. He said those critical of the policy were not objective, adding that the Imo State University (IMSU) did not lose any accreditation as reported in the media. But he said his own children do not school in IMSU where he was Dean Faculty of Law, rather he spent N1.5M recently on his child who schools elsewhere. This confession is nothing but a vote of no confidence on the Okorocha's free education policy? If the free education in IMSU was superb how come Prof Obiareri's children don't school there? Why do the government appointees prefer to send their children to private schools or public schools owned by other state governments where they pay huge sums of money? It boils down to the point that the Okorocha's free education policy is a sham, poison prescribed only for the poor.

The first sign that the Okorocha administration is anti poor is in his sacking of the 10,000 jobs beneficiaries who were employed under the New Face Government of Dr Ikedi Ohakim. Those who benefitted in the recruitment exercise were the children of the poor who had been roaming the streets. They were employed through a transparent process that did not require them knowing anyone in government. This policy alone was planned to put N450M monthly in the hands of poor Imo families and put food on their tables. But Governor Okorocha in June 2011 snatched food from the throats of the poor in Imo when he sacked the 10,000 jobs beneficiaries and refused to pay them. About 5000 of the 10,000 workers were teachers employed to teach the children of the poor.

Not done, Governor Okorocha cut short the political growth of the poor when he dissolved the development centers in the state where the poor had the opportunity to engage in politics and perhaps pursue a career in it. What of the sacking of the 27 elected local government chairmen and 305 councillors by Governor Okorocha in June 2011? The local government is a veritable school for breeding future political leaders and it is at this level that the children of the poor cut their teeth in politics and go ahead to pursue a career in it. For example, Lagos State Government now conducts election for its development centers same time it does for its local governments. But Governor Okorocha cut short those dreams not only by his illegal sacking of the elected council officials and officials of the development centers, but he has also since closed the door of opportunity for political growth of the poor by not conducting election at the local level.

No matter the tokenism of the Governor's appointment of few poor politicians as transition committee chairmen of the local governments, another indicator that he is anti the poor is that since he became Governor he has shut down all the public water infrastructure in the state. The poor do not have water as all water schemes in the state have been shut down and their equipments disappeared. The Ohakim era alone had about 1,325 water schemes scattered across the state so that they poor could find water to drink and live healthy life. By the time Governor Okorocha finishes in Imo it will require billions of naira to get the public water in the state back again.

What of the forced demolition of Ekeukwu Owerri Market by the  Okorocha administration? What of the demolition of structures belonging to the poor, orphans and widows and thereby rendering them homeless and dislocating their businesses? What of the reports of land grabbing by the government and its top officials? Since Igbo people are traders and the center of commercial activities for the poor has been destroyed by the government, what more harm could the Okorocha's government do to the poor?

Okorocha's relationship with the poor in Imo State has not been a sweet one. No one has forgotten how he treats the pensioners in the state and how he cut their pension arrears by 60%. No one has forgotten how he has been mistreating the civil servants in the state, denying them promotion and other benefits for six years. It is alarming that for more than six years the civil servants in Imo have not gone for training. The destruction going on in the state's civil service is therefore the destruction of the future of the children of the poor.

Therefore, for Governor Okorocha, the words of Jesus Christ to Judas Iscariot remains true: "The poor you will always have with you".
Posted by IfeanyiCy Njoku
Labels: Feature