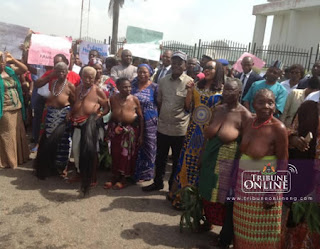 Hundreds of women across the 23  local government areas of Benue State stormed Makurdi and marched round major  streets in support of the new law prohibiting open grazing  in the state.

Among them were elderly ones who appeared half nude as they marched to government house, Makurdi, chanting victory songs over the constant attacks by Fulani herdsmen with the new law.
The anti open grazing law took effect on Wednesday, November 1, 2017 across the state.
The women carried  placards, some of which read: “Respect anti open grazing law,” “Governor Samuel Ortom, ahead ahead,” “We support anti open grazing law,” among others.
The women matched to the seat of power amid tight security.
The governor stated that the law was not initiated against any person but to protect lives and property of people of the state.
“We love everyone resident in Benue, including the Fulanis, but we cannot continue to live with killers who have no respect for human lives. This law is to the benefit of everybody as it would encourage economic activities as well as encourage the Fulanis to stay in one place and ranch their cows among other benefits
Posted by Cheta Igbokwe
Labels: News