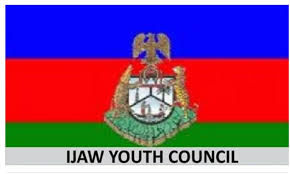 The Ijaw Youth Council,IYC World-Wide led by Comrade Rolland Oweilaemi Pereotubor Esq today warned that the use of force will only aggravate the threat to attack and destroy oil facilities by militants in the Niger Delta region.
The IYC President handed down the warning in a statement signed and made available to GREENPARROT.
Pereotubor wondered why the military flew helicopter gunships around Oporoza town in Gbaramatu Kingdom today, saying that the Federal Government should use the recent threat by the militants to wake itself up from slumber.
Pereotubor stated that the act of using a general problem in the Niger Delta to terrorise innocent people in one community or Kingdom should stop now.
He said the Ijaw nation will not fold its hands and allow the Nigerian government to invade and burn down its communities in the guise of fighting militants while innocent souls loss their precious lives.
Pereotubor noted that only President Muhammadu Buhari’s peaceful response to the demands of the people of the Niger Delta will avert the threatened attacks on oil facilities by the militants.
Only Buhari’s peaceful response to the demands of the people will avert the threatened attacks on oil facilities by the militants.
Pereotubor also adviced President Buhari not to make the mistake of sending troops to invade the Niger Delta communities.
He called on those who are advising the president to apply force to have a rethink for the sake of the economy.
He said the threat to resume hostility by Niger Delta Avengers should not be linked to any community or Kingdoms in the Niger Delta.
”The Avengers is not a community based organisation. The Ijaws are not comfortable with the steps the military is trying to take.
“Tompolo’s name and antecedents are not connected to the Avengers as far as we are concerned. If he was the reason why the military decided to invade the innocent Kingdom, he has publicly denied being a member of the group.”
“Those self-seeking individuals who want to drag Tompolo’s name in the mud should be wary of their actions. Bringing his name to the crisis of confidence that has being rocking PANDEF and other factional bodies in the region should not involve the innocent man. He already had enough persecution in the hands of the ruling Government. Niger Delta people should not add to his woes"
Posted by BizzyAmb
Labels: Niger Delta