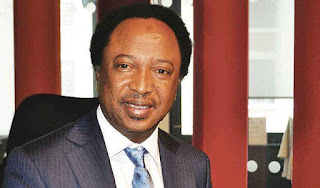 Comrade Shehu Sani, a senator representing Kaduna central has reacted to the departure of Ex-VP, Atiku Abubakar from the ruling All Progressives Congress(APC).

Sani, while speaking in an annual lecture organized by Rave FM in Osogbo, Osun state, warned president Muhammadu Buhari to be careful of the 'Cabal'.

He added that the president should choose between those who 'love him' and those who love 'the throne'. He also attacked governors that have endorsed Buhari for second terms, saying that they did that based on 'Selfish interests'. In his words;

"The ruling party should know that what destroyed the PDP was a force from inside and not from outside. It was like a case of Yugoslavia in the old Soviet Union. Lack of internal democracy and imposition destroyed the PDP.

The umbrella of the PDP was torn by the internal injustice. The ruling party should be careful.Many people who helped in bringing this administration on board are not being carried along.

Now, Atiku has left the APC for the PDP. Those that contributed to this government before getting to power were not accorded courtesy.”

It is left for Buhari to decide who loves him and who loves the throne."
Posted by Unknown
Labels: Politics