"Atiku Is A Control Freak, Returned To His Vomit" - Lauretta Onochie 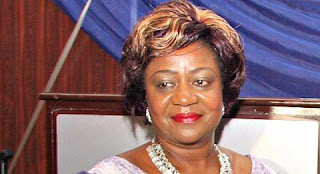 Onochie, in a lengthy post on Facebook, branded Atiku a 'Control-freak', adding that he attempted severally to take control of the APC party structure but failed woefully. She wrote;

"He has a history of always being pushed to the background. This same reason for leaving home, PDP to his temporary home APC, is the same reason he is now giving for returning home.

This history has its background in wanting to control everything. This shows he's not a Team Player. Wherever he's playing, Home (PDP) or Away (ACN, APC), he wants to CONTROL everything. He cannot stand the idea of attention shifting for a second to other people. He should consider being a Director in the movies, not politics and definitely not the Nigerian political space, fully occupied by testosterone-pumping, ego-flaunting people.

No matter where we go, our hearts are always at home. It's not different for Alh. Atiku Abubakar

Home for him is PDP. Wherever he goes, just like footballers on loan, who can decide to stay or return home, Atiku always returns home. Just as with the past, this time also, he has returned to his vomit.

I just hope he goes with all the confusions and divisions he orchestrated within the APC in a bid to take CONTROL of the party. Thankfully, he failed. Woefully!
God bless Nigeria. "
Posted by Unknown
Labels: Politics