Assassination Report: Wike Was 400 Meters Away From Scene – Rivers Police 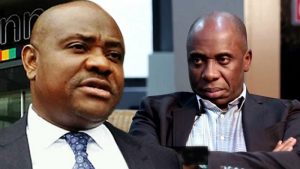 The Rivers State Commissioner of Police, CP Ahmed Zaki has said the incident that occurred between the convoys of Governor Nyesom Wike and the Minister of Transportation, Rotimi Amaechi was a mere traffic infraction.

CP Zaki, however, said contrary to widespread reports, there was no assassination attempt on the life of any of the political bigwigs.

The Rivers Police boss at a media briefing in Port Harcourt said investigation revealed that Governor Wike’s convoy was four hundred meters away from the point of the incident, adding that the Minister of Transportation had left the scene before the eventual arrival of the Governor.

CP Zaki said, “For purposes of putting the records straight and in view of the public outcry in the Media which greeted these claims, I hereby make the following clarifications;

“That on 11/11/2017 at about 1500hrs at Nkpogu junction, while the Hon. Minister of Transportation was passing through Elekahia to Nkpogu and at Nkpogu roundabout, a Police outrider in the convoy of His Excellency intercepted the Black Lexus 750 Jeep the Minister was driving just, as it was about negotiating the roundabout. The outrider was there to make way for the on coming convoy of His Excellency which was about 400 metres away.

“Police Investigation report revealed that two of the Minister’s convoy vehicles were already ahead of him while he was intercepted and stopped by the outrider.
“It is not known how the outrider fell off his Bike as dent marks on the Lexus 750 Jeep were seen on the passenger’s side of the car.
“A rowdy situation now followed with the Minister ferried by Security Agents away from the scene of the incident.

“At this point, the Governor’s convoy was not within reach to the scene of this incident.

“The Governor’s convoy eventually arrived the scene without the presence of the Hon. Minister.

“Questions were thereafter asked by the Governor’s entourage as to what happened while the last lap of Policemen from the Minister’s convoy where questioned by the CSO to the Governor as to their presence at that location and material time.

“I am aware that some altercations did occur around the scene of the incident. I wish to stress here that, the lives of the two dignitaries were not threatened as a result of this minor traffic incident.

“It is of note that, the meeting of the two convoys at that point was coincidental and has no semblance of threat to life or intention to eliminate any person.

“The Governor later proceeded to carry out a routine road inspection within the State, while the Minister attended the function that brought him to Port Harcourt.

“I want to make this abundantly clear that all acts touching on misconduct by any Policemen in the course of this incident will be thoroughly Investigated and appropriate disciplinary action taken against any person found wanting.”
Posted by Unknown
Labels: Politics