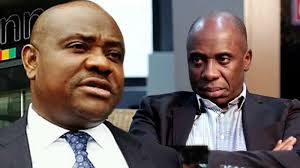 Yesterday, Governor Nyesom Wike of Rivers State and the Minister of Transportation, Chibuike Rotimi Amaechi, were accusing each other of attempted assassination, as their security details clashed.


Earlier, a statement from the Government House, Port Harcourt, claimed that Governor Wike escaped assassination when the Federal Special Anti-robbery Squad (F-SARS) and soldiers in the motorcade of the minister, who was in Port Harcourt, attacked his convoy. The governor’s  aide said that after the attack, Wike continued with his inspection of projects.
On the other hand, however, a reaction from Amaechi’s media office, alleged that the minister narrowly escaped being shot by security men attached to Wike, but ended up vandalising his car instead.
Posted by Cheta Igbokwe
Labels: Rivers State