Anambra Election: Why I Lost – Chidoka 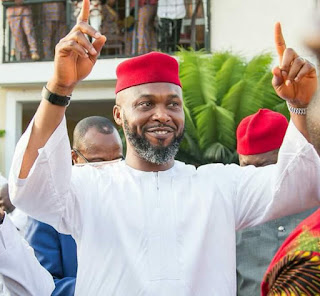 Chidoka, the former Minister of Aviation, accepted the defeat in a statement entitled “Politics Anambra election: Why I lost polls” in Awka on Sunday.

“I have accepted defeat in the Anambra governorship election even as result is still being announced by the INEC,” he said.

Chidoka said that he lost because he would not play the usual money politics.

“Our campaign attracted the finest and brightest of Anambra.

“The bold and the courageous were with us as we exerted our best in running the most robust issue-based and technology-driven campaign in the history of our dear state.

‘We attempted to change the course of events and chart a new beginning for our state.

“We believed and we dared; we engaged with all patriotic vigour as we held strongly that the long awaited time for our people to experience a new opportunity had come and we laboured for it.

“In all, our focus was the people; the forgotten, the poor and the disadvantaged.

“They were the prime impetus for our involvement. We beheld their agony and we strived to redirect and vent that energy through a genuine political process.”

He said the UPP heard the complaints of the people and worked to redirect them from the streets to the ballot box.

Chidoka said he rejected god-fatherism and money politics and made personal sacrifices with small donations and goodwill of a few good men and women.

He said his campaign remained issues-based, adding that he did not attack anybody before, during and after the campaigns.

“But from the ballots, we heard the voice of our people. We heard it loud and clear.
“On November 18 our people announced strongly their rejection of politicians.

“They traded their votes because they doubted we would truly represent their interest.

“While our message resonated with the people they doubted that the political class cared about them. They voted for the highest bidder.”

Chidoka said that as at Thursday, a large percentage of his supporters insisted that they would not vote unless he brought money.

According to him, “I insisted we will not pay for votes. The decision not to pay ended our good run.

“We accept the voters’ decision. We also heard our people by their turnout and transactional approach.

“In all, we hold our heads high; high because we did not lose the poll due to paucity of ideas or lack of “structure”.

“We lost to superior financial firepower. As Democrats, we concede to the voters’ choices.

“The true hallmark of democracy is the respect for the voice of the ballot as that of the majority,” Chidoka said.