ANAMBARA ELECTION: INEC switches to manual counting in some areas 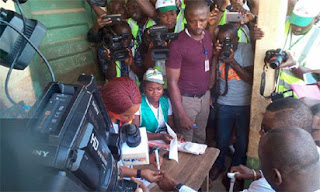 Anambra election: The officials of the Independent National Electoral Commission, INEC, in some local governments have expressed dissatisfaction over the failure of the electronic card reader given to them for the Anambra gubernatorial election.


Reports have it that the INEC officials in those local governments have switched over to manual accreditations. A notable case is that of Eri Primary School, Otuocha, where Willie Obiano, governor of the state and aspirant of the All Progressives Grand.


Alliance (APGA), cast his vote. The card reader failed and the governor had to undergo manual accreditation before voting. Again in Njikoka local government area, it was reported that all the three card readers in the polling unit were not working as at 10:45am. Officials of the Independent National Electoral Commission (INEC) were said to be waiting for replacements. Similarly, in Ichida Ward 1, Umuezesue Hall in Anaocha LGA, accreditation and voting were delayed due to card reader hitches. In some polling units in Idemili North and Onitsha North, the INEC assistant presiding officers found it difficult to operate the card readers. Some other local governments equally lamented over Card reader’s failure. However, there are cases of polling units where the smart card readers are functioning well, case in point, Akwu-Egbo Central School, Uruagu-Otolo, Nnewi, among others, thecable reports.