Alex Iwobi Reveals Why He Snubbed England To Play For Nigeria 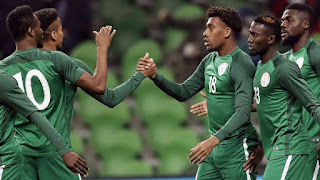 Super Eagles star, Alex Iwobi has disclosed the reasons he snubed England for Nigeria after scoring a brace in the win over Argentina on Tuesday.

The 21-year-old made the choice to play international football for Nigeria in 2015 despite featuring in England’s youth teams.
Iwobi admitted his family, including his uncle and former Bolton star, Jay-Jay Okocha, played a pivotal role in the decision.

“I was growing up in England and England was the only national team I knew, so I was actually very pleased to play at national level,” Iwobi told Soccer Laduma.

“However, my family are all from Nigeria, I was born in Nigeria, my uncle (Jay-Jay Okocha) is a legend in Nigeria.

“That’s why I thought I would give it a chance. That’s why I went to the U23s and somehow felt more welcome, and I thought it’s where I belong, so I made the decision to switch.”
Posted by Unknown
Labels: Sports