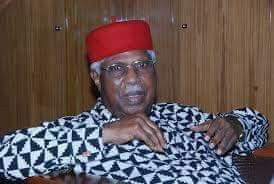 Former Vice President, Dr. Alex Ekwueme, is alive, stable and responding to treatment, an official of Memfys Neuro-surgical Hospital in Enugu, has said.
The official told the News Agency of Nigeria (NAN) in Enugu on Tuesday that ”Ekwueme is still in Memfys Hospital”, even though President Muhammadu Buhari has ordered he should be flown abroad for better care.
NAN reports that the former vice president was admitted into the hospital for chest infection.
NAN reports that contrary to reports in some quarters, the former vice president is stable and doing well.
The official told NAN that Ekwueme was receiving the best attention from the hospital.
The Official maintained that though the hospital would not give out information about its patients, “but the rumour that he is dead is false”.
“He is recovering and doing well. People should not spread false information.The family members are always here,” the official said.
NAN recalled that the Federal Government had undertaken to fly him abroad for special attention once he is more stable.
Also, Igwe Laz Ekwueme, the traditional ruler of Oko community in Orumba North Local Government of Anambra, corroborated the hospital official’s statement.
According to him, Ekwueme is alive and recovering from illness.
Laz, the musicologist, who is also the younger brother to the former Vice President, told NAN in a telephone interview in Awka on Tuesday that people had called the family to ask about the state of the elder statesman.
“You people should stop disturbing me with all these calls. Ekwueme is alive and recovering please,” he said.