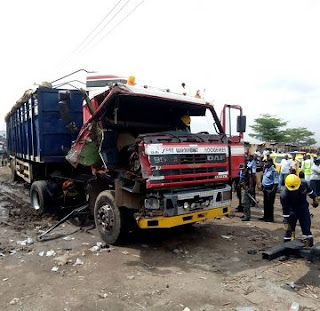 FIVE people including a male and four females lost their lives in multiple accidents that occurred on Thursday morning at Kara area of Ogun State, along with the Lagos-Ibadan Expressway corridor.

News line gathered that the accident involved eight trucks and other eight vehicles including buses and cars.
The number of injured people according to the Ogun State Sector Commander of the Federal Road Safety Corps (FRSC), Clement Oladele, were put at 19.
Those injured have been taken to emergency centers for medical attention, while obstruction caused by the accident has been cleared for a free flow of traffic.
Posted by Cheta Igbokwe
Labels: Accident, News