5 killed and 4 injured in Maiduguri 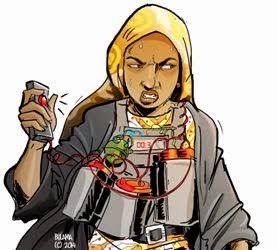 Five persons were killed and four others injured on Saturday morning as suicide bombers made unsuccessful attacks on troubled Maiduguri, Borno State capital.

The residents of the troubled town, the birthplace of Boko Haram, were already in panic as there has been a surge in suicide attacks, traced to the terrorist group, in recent times.

During the week in suicide attacks by four persons on an outskirts of the town, 18 persons were killed on the spot while 29 others sustained injuries.

The panic in the town was heightened at the weekend as a text message was circulated round, claimed that many spot targets are being targeted for attacks in the latest security breach on the Northeast state, which has been under terrorist attack in the last six years.

The text message in circulation read: “An information received from the Army intelligence that the Boko Haram suicide bombers are trying to attack NGOs’ vehicles, clinics, mosques, markets, churches, and all gathering places.

“Therefore people should be vigilant on their movement. Please share this info with other NGOs actors. The source is from arrested Boko Haram boko yesterday (Friday) night along Gubio road.”

Confirming the suicide attacks on the town, the spokesman of the Police in Borno State, Victor Isuku, a Deputy Superintendent of Police, in a statement said: “In the wee hours of today 18/11/2017, two female suicide bombers detonated their IED vest in the outskirt of Alakaramtii village in Jere local government area, killing themselves alone.

“Then at about 0650hrs, two other teenage female suicide bombers infiltrated Alakaramtii village. One of them hurriedly detonated her IED vest killing herself, her partner and an innocent boy. While four others including the mother of the innocent boy, sustained injuries.”

He added that: “The corpses and the injured have been evacuated to University of Maiduguri Teaching Hospital.

Isuku said: “The police EOD team promptly rendered safe the unexploded IED vests and sanitised the area. Normalcy has since been restored to the area.”
Posted by Cheta Igbokwe
Labels: Bomb