26 dead in Texas church shooting including a family of 8 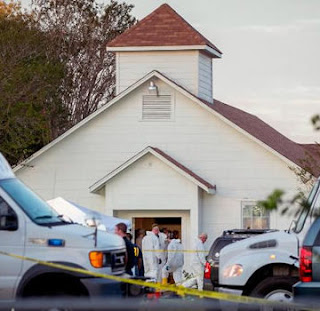 A shooter killed 26 people at a Texas church and at least eight of those victims were members of the same family, according to a relative and a community leader who both spoke to CNN.


The mass shooting, which happened during a Sunday morning service, shocked the small town of Sutherland Springs, located about 30 miles east of San Antonio.

About 20 other people were wounded at the First Baptist Church. The massacre was called “the largest mass shooting in our state’s history,” by Texas Gov. Greg Abbott.

Using a rifle, the gunman shot victims between the ages of 5 to 72 years old, said Freeman Martin, a regional director with the Texas Department of Public Safety.

At least eight of the people killed were members of one family, according to a relative and a community leader. A woman who was about five months pregnant and three of her children were killed. The pregnant woman’s brother-in-law and his young child were also killed, according to the community leader. Three other members of the same family were injured. CNN is not naming the victims at this time, as it isn’t yet confirmed that their next-of-kin have been notified.

Among those killed included the 14-year-old daughter of the church’s pastor, according to Sherri Pomeroy, the girl’s mother. Her parents were traveling out of state when the shooting occurred.

The shooter fled the church, was chased and later found dead in his vehicle, officials said.

A witness told CNN affiliate KSAT that he and an armed resident had pursued the gunman in a car chase.
Posted by Cheta Igbokwe
Labels: International news