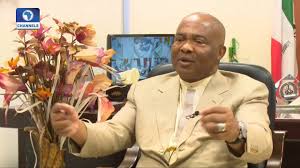 In an interview with Vanguard newspaper, Senator Hope Uzodinma PDP Imo West Senatorial District, said he has been in the PDP since its formation and has contributed his quota. Except below:
I have no intention of leaving the party. We are all praying that whatever disagreement that currently exists in the party will be resolved amicably. That will help a party that has done much for us to be stronger.

We pray that God will help the party back to winning ways. I am an optimist. I believe that the party will get stronger. I believe that whatever that is not proper in the party now will be fixed. We hope to elect a leadership that will be focused and strong at the December 9, 2017, National Convention. We also hope to elect leaders who will care for the party and work hard to bring back every good thing that is not currently in the party.
I hope that the new leadership will mobilise the party back.

PDP has a good presence in all the 774 Local Government Areas in Nigeria. PDP is a party that has spread, history and the party that was in power for 16 years. I don’t think it will be easy to push away PDP.
All we need is a focused leadership, committed functionaries and support for those who will be elected to run the affairs of the party.

Nothing is impossible. We will do ours as human beings but the will of God will prevail. God gives power and God also expects us to do the little we are expected to do. That is why the determinant factor of whether the party will bounce back or not will depend on the type of leadership that will be elected. So, we don’t need to be talking of Markarfi or Sheriff, the Supreme Court has given its judgement and the judgement stands. But let nobody take advantage of the judgement to undo party faithful, who didn’t follow whatever faction and rubbish whatever prospects we have. That which will unite us should be protected in the interest of the party. We must recognise strengths wherever they exist and deploy them to become the strengths of the party.