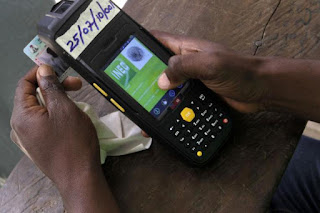 There are plans to replace the card reader in the conduct of elections in the country,the Executive Vice Chairman/Chief Executive Officer, National Agency for Science and Engineering Infrastructure (NASENI), Mohammed Sani Haruna has said.

He gave the hint yesterday after the National Economic Council ( NEC) meeting presided over by Vice President Yemi Osinbajo at the Presidential Villa.
LEADERSHIP recalls that the card reader which was first used in the 2015 general election, is a portable electronic voter authentication device, configured to read only the Permanent Voter Cards issued by the Independent National Electoral Commission.

The card reader was designed specifically for the accreditation process, authentication of eligible voters before voting.The machine was configured to read only the PVCs of a particular polling unit and can only work on Election Day.
According to Haruna,the replacement would be a made in Nigeria “Solar-Powered Electronic Voting System” to effectively mitigate current electronic woes.

He said “The Executive Vice Chairman/CEo of the NASENI presented an homegrown proposal to the NEC for the replacement of the “Card Reader” in the conduct of Elections in the country.

“The proposal is a made in Nigeria “Solar-Powered Electronic Voting System” to effectively mitigate current electronic woes.
“The new proposed robust e-voting device will minimize human interference with electoral process. The same proposal which has already been presented to INEC is also expected to be presented to the National Assembly.

During his briefing, the minister of Budget and National Planning, Udo Udoma informed council that signs of recovery in the economy had been observed since Q3 2016 and the recovery consolidated in Q3 2017 with GDP doubling to 1.40% Non-oil GDP contracts in Q3 2017 by 0.76% after growing in Q1 R Q2 2017.

While noting that the services sector is still in the negative, he added that the manufacturing sector grows negative in Q3 2017 also.

He explained that due to high inflationary pressures, household consumption expenditures remain constrained, though it appears such pressure is easing.

Udoma observed that headline inflation has declined since January reflecting tight monetary policy even as food price increases have remained persistent but slowing down.
Posted by Unknown
Labels: Politics