Zlatan will return before this year runs out - Mourinho 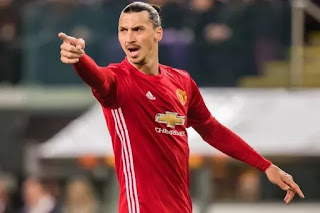 Manchester United gaffer Mourinho is confident Zlatan will be back on the field of play before this year runs out. The former PSG star wants to be back in action in early December and Manchester United boss Mourinho believes it is going to happen.
Zlatan made a speedy recovery from a career threatening injury The Portuguese said: "Zlatan will be back. Zlatan is working here and under control, working as I would expect so, so hard. "He's not going to be back next week or a couple of weeks. Let him take his time and be back when everybody feels is the right moment.
"Do I believe he'll be back in 2017? Yes I do."
The United number 10 has been working with club legend Andy Cole on his return.
The former Old Trafford striker said: "I had a chat with Zlatan when he was in the gym the other day. "I think he is looking forward to coming back, most probably in December or January time .
Posted by Cheta Igbokwe
Labels: Gist, News, Sports, zlatan