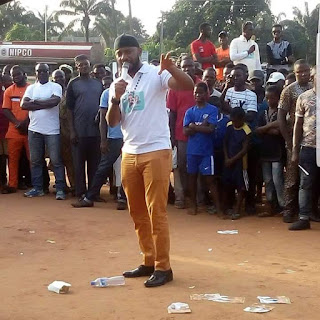 The spokesman (Comrade Nnadi Goodluck) of his political party has released a statement on his official Facebook page.

This is what he wrote,


DPC Govornorship candidate, Yul Edochie and his deputy, Emeka Okonkwo were received in Umunachi in Dunukofia Local Government on the 14th of October, 2017 in a Home coming rally organised by Anambra Young Professionals and Gaaniru Anambra in honour of their member, Emeka Okonkwo.

The State Chairman of Democratic Peoples Congress Hon. Ezeagu Israel who declared the event open, said that it was time for the older generation to give way to young vibrant leadership. He noted that many Nigerian leaders today made their most significant impact in their youth. He said "Anambra people are tired of recycling the same people in government. Older people may not understand the challenges of the youth. The unemployment rate in Anambra is alarming and it is only a Youth who understands and who feels the pain of his fellow youth will understand".

Ike Odionu Esq, the President General of Umunachi Town Union who received Emeka Okonkwo in his country home also thanked Emeka for having the courage to represent the people. He acknowledged how tough the race to the government house is, but noted that such a decision is right.

Emeka Okonkwo spoke about the erosion  challenges suffered by his Constituency, Dunukofia LGA and promised them that his administration will ensure that his administration will tackle the erosion problem in Dunukofia. Emeka said "The lack of independence  of local governments in their administration has hindered grass root development. A situation where you have transition chairmen instead of Elected Chairman means that the state government dictates  their affairs and this is not right". He also noted "we must encourage local government autonomy, the state government may not be conversant with every little or big challenge faced by various communities but the Local Government can identify and solve these issues without the State government knowing if the state Government encourage Local Government autonomy" Emeka said that more girls have enrolled in to school than boys, and blamed this on lack of Technical Colleges in the State which will assist young men who feel uncomfortable with conventional education to be solution driven without missing out in having formal education. 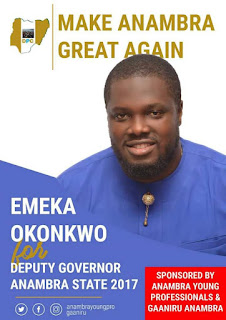 Emeka Condemned the uncountable road blocks in Anambra state and blamed it on the rate of unemployment. He said " when people have no jobs the propensity for crime will be high, the duty of the Government is to fix the problem of the people. These Road blocks are causing painful and embarrassing traffics, coupled with the fact that the Enugwu - Onitsha express way between Nkwelle  and Awkuzu; and Amawbia is terrible, therefor these big trucks now use the old awka road. This becomes heartbreaking when all the vehicles passing through Anambra are using on road and you still police road blocks there, how do you think people will feel when they spend more than 3 hours for 45 muintes journey. We need to fix this". 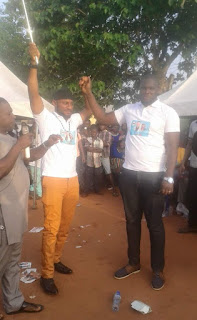 Yul Edochie also spoke against the manner in which past governments have treated the youths. He noted that the population of Anambra  youths are more than that of the older generation and therefore with such strength a youth can win an election. He encouraged  with Umunachi People to support Democratic Peoples Congress and to resist any plan to mortgage their future.

Chijioke Ifediora the state legal Adviser
mandated every member of the Party in the Local government to take their destiny in their hands and ensure that their votes are not compromised. He also said that the legal machinery-post elections has been assembled and that whatever the outcome is that DPC is ready to follow due process. 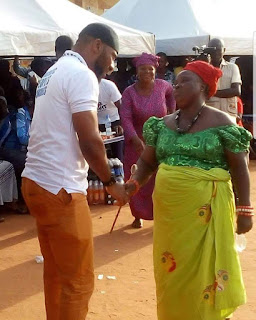 The Umunachi Women and Youth Leader appreciated Emeka for bringing his first official campaign since his emergency as the Running mate of Edochie. They said that such act shows humility and value for your people. The people of Umunachi promised to deliver Dunukofia to Democratic Peoples Congress.

*Speech Delivered by Emeka Okonkwo at Umunachi Central School, Dunukofia on the 14th of October, 2017.*

I want to recognize some people here before I begin.

My friend and the Governorship Candidate of our party, Yul Edochie!

I am delighted to be here today. This is the will of God and that of man. I want to give God glory for the privilege and opportunity to serve Ndi Anambra. Nothing happens without God's permission.

I want to officially tell you all that the people of Anambra  through our Party Democratic Peoples Congress (DPC) choose me to serve Ndi Anambra  as the Deputy Governor of Anambra  State. 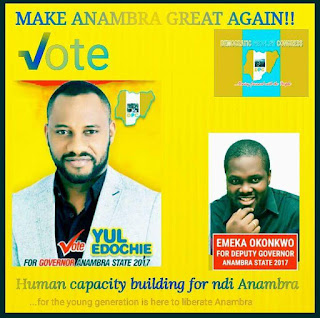 There are things in Anambra that breaks my heart. The rate of unemployed youths in Anambra.  There is a report that more girls are enrolled into school than boys. The crime rate has increased among youths. This is not meant to be umunne m. We must make Anambra Great again.

I want to remind every youth here that, your youthful age is the most potent part of your life. I want to remind you that All Anambra legends made their impact and served there people from their youth. The likes of Senator Chuba Okadigbo  ( Oyi of Oyi & the former Senate President) Dora Akunyili, Alex Ekwueme, Nnamdi Azikwe, Emeka Anyako, Chinua Achebe and Chimanda  Adichie. Anambra nwelu mmadu.

It is time to start a revolution of young people in governance but we all have to do the following to succeed;
* we have to be prepared as youths.
* we have to support a fellow youth.
*we have to protect our votes.

As I mentioned earlier the challenges facing us, I wish to say here that if given the opportunity by November 18 2017 there will be a transformation in our environment especially the people of Dunukofia.

Ndi Nnaogu do not have accessible roads to their town.
Ukpo Akpu is already been overtaken by erosion.
Ifitedunu general hospital do not have the required facilities.
Dunukofia does not have a technical college or secondary school for people who belive that the conventional education may not be helpful and that their skill needs to be improved.
Our markets needs to be rebuilt.
Dunukofia can be the next Nnewi if we have good leadership.
We need to fix the problem that pulled our children's WAEC backwards.
We need to implement  teachers welfare. If we make teachers comfortable results will improve. Teachers are the most important people after God. In fact God is a teacher.

We need to amend our educational curriculum to include a course called Anambra or Gaaniru this will be a course that will build in every child the patriotic spirit about his local community not Nigeria. A course that will assign you the duty to brain storm on how to make your town a mega city. It is possible. If children begin now to think about their town or community, people will stop leaving Anambra to Lagos to Abuja.

We have to invest in  Anambra. Let us be mindful  of how we invest outside Anambra. Anambra is out home.

One thing I am working on addressing is this police check points everywhere in Anambra. We appreciate the work of the police. And I want to say that the police has sacrificed night and day to ensure that we have good night rest. But some of them have not entirely been keeping to the laws of the land. Some of the police check points have been used as an instrument of encroaching on people's right. Ndi Anambra I urge you to stand up for your rights, fight for it. This race to make Anambra great is a collective effort.

I want to thank you all for making this homecoming a successful one.