Menu
Home » Politics » What I Will Miss After My Tenure – Fayose

What I Will Miss After My Tenure – Fayose 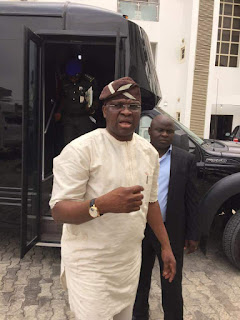 Ekiti State Governor, Mr. Ayodele Fayose, on Tuesday declared that the only thing he would miss after relinquishing power is Ekiti people, who gave him immense support while in office.

The governor also declined comment on his car, Mercedes Benz Jeep, G Wagon, which got burnt at Apapa-Osodi expressway in Lagos State on Wednesday.
Speaking while distributing a sum of N94.08 million to 11 communities for grassroots development at the government house pavilion in Ado Ekiti on Thursday, Fayose said: “I will miss Ekiti people so dearly, because I have been used to them. I love finding myself in their midst and this is what I will miss sorely”.

The project was financed by the Ekiti State Community Development Agency (EKCIDA) in partnership with the World Bank.
Fayose, who used the opportunity to rally support for his preferred governorship aspirant and Deputy, Prof Kolapo Olusola, added that the people will benefit more when they have a governor they can easily access and control.

“Do you know that I have not entered my office in the new governor’s office in the last one year. I have always been with the people on the streets to fraternize with them and that is the essence of leadership.
“No governor must rate himself higher than the people that elected him. That is why you must support continuity project. That is why you must vote for Prof Olusola .
“I am the first governor to spend second term in Ekiti and it will be to your benefit if you can allow me to hand over to a man of our choice.

“So, henceforth, you can call my deputy governor-in-waiting because with these your supports, I could say he had already won”.
He said the project, which will be done in phases, was to help the communities execute projects they can’t undertake through their financial power.
“Our aim is to ensure that all the 133 communities benefit from this programme. All they need to do is to pay the 10 % counterpart funding and they can access the fund for community development”, he said.

When asked about his burnt car, where he escaped death by the whiskers, he quickly retorted: “I don’t want to comment about it”.
Fayose appealed to the committees set up by each community to use the
money judiciously in their overall interest.
The Chairman, Council of traditional rulers in Ekiti and Oloye of Oye Ekiti, Oba Oluwole Ademolaju and the Olojudo of Ido Ile, Oba Obaremi Adeleye, commended the governor for his grassroots and participatory approach to governance.

Oba Ademolaju said: “This is not about a king playing politics, but about laying the facts bare. Governor Fayose is accessible. He is a man of the people and that is why we must support him to be able to give a good successor that Ekiti can be proud of.

“How many governors in Nigeria can choose their deputies as successors even when they always see each other as enemies? Governor Fayose choosing his deputy to succeed him is commendable and he must be backed by people because it shows that the team we are having is good”.
The monarchs told the benefitting communities to spend the funds on projects that would be of tremendous benefits to the people.
Posted by Unknown
Labels: Politics