The last statement KANU made before gotten missing - EJIOFOR 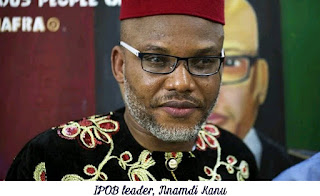 Ejiofor who has been lamenting of his inability to reach Kanu since the military stormed his Afara-Ukwu, Umuahia, Abia State home. In a chat with Saturday Sun, he recalled that he got a call from Kanu on 14th September that army personnel were shooting sporadically around his house.
“I quickly issued a statement which was widely published on the social media alerting the world of what was going on; that my client was under siege as the military was shooting for over 40 minutes trying to gain access into the house.
“He called me again that they were at the gate shooting to gain access, I asked him to remain inside"
“I believe if at all they wanted to arrest him, they would have extended invitation to him saying we want you at this period to interrogate you; there is allegation of this and that offence, be it police, army or the DSS.
“But in this case, Nnamdi Kanu had been visible; moving around, going places, meeting people and was very certain of coming to Abuja before now to face trial, so, people who attacked him, killed people in his house, wounded people and arrested people, should be in a position to show us where he is.
Speaking on the issue of sureties who are expected to produce the IPOB leader in court, Ejiofor said they cannot be touched “because the circumstance that presented itself is such that had gone beyond the sureties’ control.
If at all this incident never took place and by tomorrow we start looking for Nnamdi Kanu, they will be told to go and produce him.