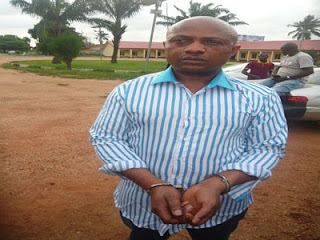 Suspected billionaire kidnap kingpin Chukwudumeme Onwuamadike alias Evans has told a Lagos High Court in Igbosere that the fresh charges against him are so ridiculous that only a court run by Uganda’s former military dictator Idi Amin Dada can entertain them.

He urged Justice Oluwatoyin Taiwo to quash the twin charges and 11 counts filed against him by the Lagos State Government and allow him “to go home.”
Evans’ counsel, Olukoya Ogungbeje, also accused the prosecution of conniving with the court registrar to improperly obtain a document relating to the case from the court files.

“Whatever has been removed from the court files should be made available to me,” Ogungbeje said.
This was, however, dismissed by the judge after a strong objection from Director of Public Prosecutions (DPP) Ms Titilayo Shitta-Bey.

“I take a very strong exception to learned counsel’s comments. That is a very strong allegation,” Shitta-Bey said.
Justice Taiwo, who assured Ogungbeje of fairness in the trial, said: “I trust My registrars implicitly.”
The proposed charges, seen by The Nation on Monday when Evans and his alleged sccomplices were brought first brought to Igbosere, has four counts on one and seven counts on the other.

The second to fourth defendants are Joseph Ikenna Emeka, Chiemeka Arinze and Udeme Frank Upong.
According to the second charge, the state will call 12 witnesses – six civilians and six senior police officers – to testify against Evans and Aduba for the alleged attempted kidnap of Obianodo.

The prosecution also listed nine exhibits that it intends to tender, including four rifles, two pistols, bullet proof vests, among others.
Before his first charge could be read last Monday, Evans, through his counsel, Olukoya Ogungbeje, drew the court’s attention to his two applications challenging the competence of the charge.

At the commencement of proceedings yesterday, he argued that both charges should be quashed and dismissed on the grounds, among others, that they were repetitive and duplicitous.
He also argued that the third and fourth counts on the first charge relating to firearms possession and sale required the fiat of the Attorney-General of the Federation which, according to him, the prosecution did not have.

He added: “Only a court in Uganda, Idi Amin’s Uganda, will entertain this kind of information (charge). This kind if charge can only be filed in a court in Uganda. We are in Nigeria. I urge this court to dismiss the charge against the defendant and allow him to go home.”
His applications to quash the charges were brought pursuant to Section 55 of the Administration of Criminal Justice Law of Lagos State, 2015 and Sections 36 and 6 (6) (b) of the Constitution.

Ogungbeje argued that all 11 counts in both charges were “bad for duplicity, grossly defective, a gross abuse of court’s process and do not disclose a prima facie case” against Evans.
However, in its counter-affidavit, the Lagos State Government contended among others that there was no duplicity in the charges.
Shitta-Bey explained that the second to fifth defendants in the new charge are not defendants in charge number; ID/5970C/2017.

She stated that apart from the confessional statements of Evans, arms and ammunitions were recovered from him and his alleged cohorts.
As to why Evans could not be tried in one court for all the charges, she said: “It is not feasible to bring all the charges before one judge for reasons of logistics and it is going to make the case of the prosecution so complex and difficult to prove.

“We have many victims and witnesses. The offences happened at different times, places and spanned over several years. The only common factor is the defendant.”
The DPP also countered Evans’ claim that the prosecution had no fiat from the Attorney-General of the Federation to prosecute the case.
Justice Taiwo, however, adjourned till November 10 for ruling on Evans’ applications.

The judge also ordered that Evans’ three co-defendants on the second charge be moved to Kirikiri Maximum Security Prisons, Ikoyi.
Justice Taiwo made the order following an application that one of the suspects requires medical attention which are better available in prison.
The suspects have been in police custody since their arrest, unlike Evans who was transferred from the police to prison custody following his arraignment before Justice Hakeem Oshodi of a Lagos High Court in Ikeja.
Posted by Unknown
Labels: Crime