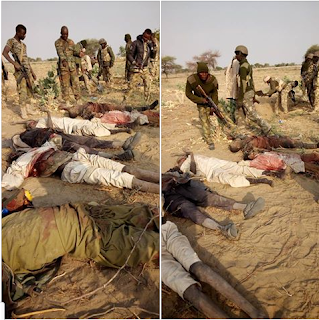 Our gallant soldiers fighting tirelessly for the safety of the country. Some soldiers were in high spirits after a military onslaught against Boko Haram insurgents in the dreaded Sambisa forest. The soldiers who dealt a very big blow to the terrorists sect, posed with the dead bodies of its fighters for pictures after the clearance operation
Posted by Unknown
Labels: Politics