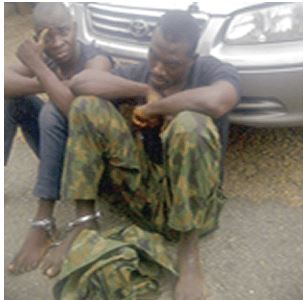 Thirty-four-year-old Lance Corporal Abubakar Isiaka who deserted the army because he was listed among the soldiers to fight Boko Haram in Sambisa forest as he was afraid of his life has landed in trouble.

According to a report by NewTelegraph, Isiaka who abandoned his duty post and kissed goodbye to the Nigerian Army as he didn't want to lose his life fighting the terrorists was recently caught after he allegedly snatched a car belonging to another man.
Attempting to explain why he deserted the army, Isiaka said that he was tired of watching his friends and colleagues die at the war front, in the hands of Boko Haram men.

He said: “I was not officially dismissed from the Army. I decided not to go to work anymore when I was posted to Sambisa Forest to tackle the Boko Haram sect. I was among Nigerian soldiers that went to the Sudan Peace Keeping Mission. It was upon my return to Nigeria that our commandant noticed that I was still agile and gallant.
He then sent me and some of my friends to Sambisa Forest. I lost most of my friend in that battle. I then decided to leave the battle; I didn’t return to the army base since then.”

After walking away, Isiaka didn’t return property of the army. One of the items he went away with was his uniform. He started using the uniform to commit crime. He was eventually arrested along with his partner, an ex-convict, identified as Saheed Akangbe, 24.

Isiaka and his partner in crime were presented to journalists by the Oyo State Commissioner of Police, Mr Abiodun Odude. They were both arrested for allegedly snatching a Toyota Camry car. Odude said that both men specialized in snatching different kinds of cars from unsuspecting owners.

One of the cars allegedly recovered from them is a Toyota Camry car, marked KJA 89 ER. They were arrested in Ibadan, on October 22, around 11:20pm, at Iyana-Offa, Lagelu area of Ibadan. The duo allegedly confessed to series of car snatching operations in Ogun, Lagos, Oyo, and other neighbouring states.

Asked what he had been doing since he walked out on the Nigerian Army, Isiaka said: “I usually lead my friends with my army uniform to find buyers for our stolen cars. I was always well settled. It was my friend, Ismail Adeosun, who is still in Abeokuta Prison that asked us to bring that Toyota Camry car to Ibadan for sale. It was unfortunate that when we got to Ibadan later in the day, we couldn’t get the buyer before we were arrested.”

Recollecting how they were arrested, Akangbe, said: “We were asked to come to Ibadan with the stolen car to deliver to a buyer; but on getting to Ibadan, we couldn’t locate the person that our friend asked us to call. It was late in the night; we decided to sleep inside the car till the following morning, unfortunately, while we were sleeping, a night guard walked over and asked us to come down from the vehicle. On sighting my partner with army uniform, he apologised and went away. He later returned with policemen.”
Posted by Unknown
Labels: Crime, News