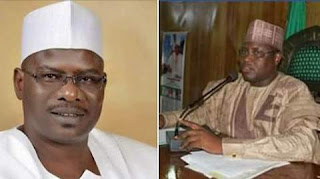 The Borno state house of assembly has suspended all its activities following the attack on a lawmaker by Senator Ali Ndume.

Ndume allegedly slapped Hon. Habu Dala Aji, a member representing Damboa, while he was trying to settle a dispute between Ndume and electorates. Below is a statement from the Borno house of assembly obtained by PoliticsNGR on the matter;

Pending the outcome of a resolution passed in respect on an attack on its members, the speaker of the house Abdkareem Lawal in a press statement issued to pressmen in Maiduguri that a member representing Damboa, Hon. Habu Dala aji was slapped by Senator Ali Ndume in his residence when he was trying to settle a misunderstanding between his electorates from Damboa. In the same vein, some hoodlums attacked and beat up honourable member Mohammed Saleh Baga into a state of coma and was hospitalised for 3 months.

The house resolved that:

1) all sponsors and those who attacked Saleh Banga should be arrested and arraigned. Before a court of law by security agencies,

2) the inspector general of police (IGP) and Senate president are to investigate the action of Senator Ndume's slapping and humiliation of Hon. Habu Dala Aji,

4) The Honourable House also resolve to suspend legislative activities for 1 month pending the outcome of the resolution passed.