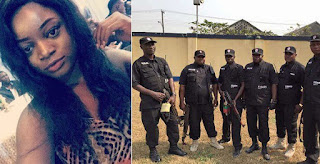 Anifela had taken to Instagram to narrate how she was sexually harassed by the officers who labeled her a ‘ yahoo girl ‘ and also a prostitute in Ilorin. She specifically accused one of the officers of inserting his fingers into her private parts.

The officers have reportedly been arrested and will now face investigation over the matter.
Posted by Unknown
Labels: Crime, News