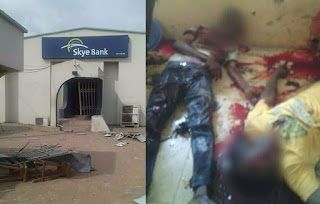 Two policemen were, Thursday, killed in a robbery attack on a Skye Bank branch in Ifon, Ose Local Government Area of Ondo State.
Stray bullets of the armed robbers were also said to have killed another man at a hospital very close to the bank.
The bandits, numbering about 15, reportedly invaded the bank about 3p,m when its workers had already stopped transactions with customers.
Posted by Cheta Igbokwe
Labels: News, Robbery