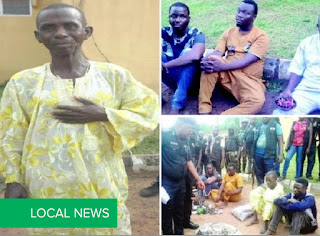 Suspected ritualists arrested by the police in Ogun state have confessed to trading and using human body parts for money ritual.
It was said the first set comprised of two suspects, Lateef Aremu and Kola Sodipo and that they were arrested after SARS got information about them.
Kolawole Sodipo and Lateef Aremu were arrested. Recovered from them were human skulls and bones, as well as six live cartridges.

Aremu in his confession claimed he was a farmer and herbalist and that the skulls found with him were brought to him by a colleague.

“I am a farmer and an herbalist. We were doing a foundation in Itoko where I wanted to build a house; there, we saw these bones and we packed them inside a bag and that is all. However, when we wanted to do money ritual, he brought a dry skull for the purpose. “What we did was to grind the skull and add other ingredients, including a white dove and local soap. It has been up to 20 years since I have been in the business. I don’t use human parts all the time. I only do once in a while. “I have built four houses and bought up to 15 vehicles since 1980 when I started this business”.
Posted by Cheta Igbokwe
Labels: Gist, News