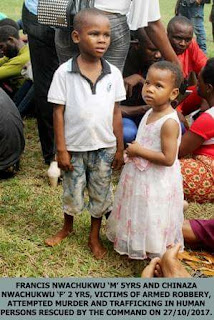 The Imo state police command has arrested a five man syndicate in Enugu state after selling kidnapped children to the highest bidder. The gang reportedly attacked the mother, stole the children from her in Uzoagba in Ikeduru Local Government Area of Imo state, took them to Enugu state and sold them to a waiting buyer for N1.1m.
The suspects; Obinna Eze, Oluchi Chibuike,Vitalis Lumanze, Nkiru Nwanedu, Chinyere Nwudu and one Jacinta, were arrested by the police for allegedly kidnapping and selling a five-year-old boy, Francis Nwachukwu and his two-year-old sibling, Chinaza Nwachukwu. 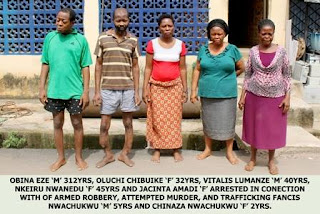 According to the police, in the morning of August 30, 2017, Oluchi and Obinna allegedly took the two children to Enugu State and sold them to one Nkiru Nwanedu for N1.1m after attacking their mother along a lonely bush path and dumping her inside the bush, thinking that she had died.
The suspects were said to have been arrested after a thorough investigation.
The police say the only fleeing member of the gang, identified as Chinatu, would soon be arrested.
Posted by Unknown
Labels: Crime