Onyeka Nwelue: "Don Jazzy Is Broke, He Is A Tenant". Don Jazzy Reacts 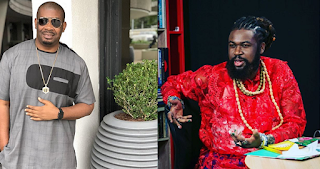 Don Jazzy has reacted to Onyeka Nwelue‘s viral article in which the Nigerian writer claims that the Mavin boss lives as a tenant and is broke.

Posting on his Instagram yesterday, Nwelue encouraged young Nigerians to take pride in their own works and not be swayed by the lavish facade celebrities pull on their social media.

“Garb yourself with some self-esteem, self-confidence and self-pride. We are all poor. Us and the celebrities. All the celebrities in Nigeria,” said the writer-cum-filmmaker who is famous for speaking his mind without bothering with filters.

welue continued, saying, “ Every celebrity in Nigeria is broke. They are like me. They don’t have the money they tell you they have. Many of them I have seen their bank statements. I don’t care if they start avoiding me now. I know better. Stop feeling inadequate, young people. You see as I beg for money publicly, that is how these celebrities suffer and beg for money secretly.”

And to drive home his point, he added, “ Don Jazzy is a tenant. He is broke. Forget everything .”
That part of his article hit a raw nerve. While fans argued the possibility of Don Jazzy being broke, especially because he never shies away doling out cash to needy fans, the Mavin boss spoke up.

And he agreed entirely with Onyeka Nwelue in his signature cheesy tone. “ True talk ,” said the Mavin boss, and he went on to add that he is only speaking for himself.
“May God provide for us sha ,” Don Jazzy concluded.