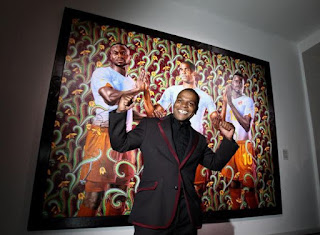 Kehinde Wile who happened to be an artist from Nigeria, known for his paintings of African-Americans and reinterpretations of classic artworks, has been chosen by former President Barack Obama to paint his official portrait for the Smithsonian’s National Portrait Gallery.
.
At the end of each presidency, the museum partners with the White House to commission one official portrait of the President and First Lady.
.
Michelle Obama selected artist Amy Sherald, who is known for her life-size paintings of African-Americans, to paint her portrait, the museum announced Friday.
.
Both Obamas’ portraits will be unveiled at the National Portrait Gallery in 2018, where they will be added to the museum’s permanent collection.
.
Kehinde was born to a Nigerian dad and an African-American mom. As a child, his mother supported his interest in art and enrolled him in after-school art classes.
.
Kehinde did not grow up with his father, and at the age of 20 traveled to Nigeria to explore his roots and meet him. He earned his BFA from the San Francisco Art Institute in 1999 and his MFA from Yale University, School of Art in 2001.
Posted by Unknown
Labels: Gist, News