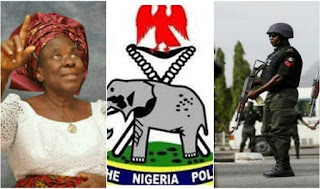 One of the suspects who allegedly kidnapped, killed and buried an elderly woman, Mrs Catherine Okorie in Ishiagu, Ivo local government area of Ebonyi state has allegedly escaped from police custody in Abakaliki, the capital of Ebonyi State.
Catherine hailed from Ishiagu and was kidnapped in her residence on January 18, 2017.

Recall, her abductors killed her four days later and buried her in a shallow grave located in a forest bordering Lokpanta in Umunneochi and Awgu council areas of Abia and Enugu States respectively, for reportedly recognizing one of them.

According to new telegraph, the suspect whose name was given by the police as Ogonna Alioka alias Pilot when he was paraded alongside other suspected criminals in August 8, 2017, allegedly escaped on the night of 22nd October 2017.
This was disclosed to reporters in Abakaliki by the son of the deceased, Mr Ikechukwu Okorie, in his residence in Abakaliki.

The visibly angry son said that although he was yet to be briefed officially by the police, the intelligence information available to him was that the suspect was no longer in the police cell.
“Do you know the one that is paining us?” he angrily queried. “We spent our money and other resources; we funded the expeditions and this thing happened on January 18 and she was killed on 22nd of the same January.

“By July 31, 2017, we caught the man that drove the vehicle to my compound the day they kidnapped my mother.
“God delivered him into our hand. My brother do you know what we are hearing? That Mr Ogonna Alioka that we know how much we spent for him to be caught since 31st July 2017 has disappeared from the cell they kept him. They said this man disappeared from the police cell last Sunday being 22nd October 2017.

“Where do they tell that kind of nonsense? And this is a man that has given a foundation-shaking confessional statement.
Our lawyers mounted pressure on the police to arraign this man in court since 31st July. This is October but they are yet to do that.
“They kept dig-dallying only for us to hear from the back door that he is no longer there. However they did it; whatever caused them to release the person that went, kidnapped and shot our mother dead and they would not arraign the person.

However the person disappeared, I am sure that Ebonyi State Police Command is joking. It’s a joke of the century” he thundered.
He alleged that a prominent politician from Ishiagu community [names withheld] who he alleged had a hand in the fate of his mother has been making efforts to close up the matter.

When contacted on the telephone, the state Commissioner of Police, CP Titus Lamorde, referred our correspondent to the Police Public
Relations Officer, ASP Loveth Odah.
However, all calls and text message to her were neither answered nor replied two hours later before this report was filed.