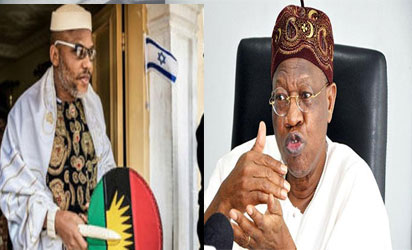 The Minister of Information and Culture, Alhaji Lai Mohammed, has called on Nigeria’s international partners to designate the Indigenous People of Biafra (IPOB) a terrorist organisation. IPOB cartoon The Minister made the call in his article, entitled ”Thwarting Terrorism in Nigeria”, which appeared in the US newspaper ‘Washington Times’ on Thursday, 12th Oct. 2017.
He argues that IPOB’s actions qualify the group as a terrorist organization in most jurisdictions. On 20th Sept 2017, the Federal Government of Nigeria proscribed IPOB, which has been violently agitating for a separate state in the South-East. “The terror lays bare their opportunism. They masquerade as a separatist movement, yet they endanger the very people they claim to represent. In reality, IPOB cares about IPOB and nothing more,” Alhaji Mohammed said. Using the words of IPOB leader Nnamdi Kanu, such as “If they fail to give us Biafra, Somalia will look like a paradise compared to what will happen to that ‘zoo’ (Nigeria).”

“I don’t want peaceful actualisation (of Biafra)”; “We need guns and we need bullets”; “If they don’t (give us Biafra), they will die,” the Minister exposes IPOB as a terrorist organization like ETA in Spain, the Tamil Tigers was in Sri Lanka, and the PKK is in Turkey (all of whom are proscribed by the U.S. State Department).
He makes clear that this administration will not make the same mistake as the previous in allowing terrorists to capture land. “The government reiterates its appeal to its international partners to proscribe the organization, and in doing so, starve it of the funds which gives it sustenance. Nigeria has just defeated one preventable terrorist insurgency. This one must not be given the chance to get a foothold,” the Minister writes.