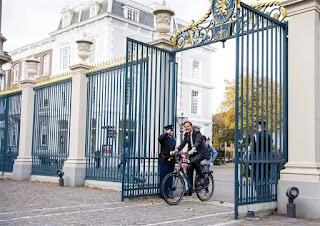 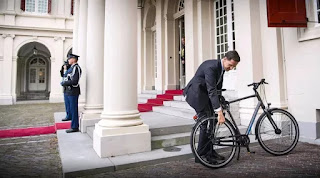 A photo of the Netherlands prime minister, Mark Ruthe, all smiles as he rode a bicycle to the palace of the king of Netherlands, as gone viral. The viral photo showed Ruthe locking his bicycle upon arrival at the palace with palace guards manning the entrance already adorned with red carpet.
Netherlands, a country of over 17 million, is believed to have more bicycles than persons. Ruthe is however not the only country head to dump the use of flashy convoy recently.
On October 5, Indonesian president, Joko Widodo, was forced to come down from his convoy and trek 3 kilometer to attend a state event. Widodo was forced to make the decision after his convoy ran into a heavy traffic in Jakarta, the capital of Indonesia.
Posted by Cheta Igbokwe
Labels: Celebrity gist, International. News