Lawyer Brutalized By Policemen Attached To A Lawmaker In Lagos 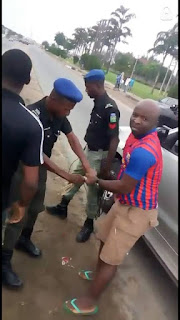 Hon Chinweuba Moses, a Nigerian Lawyer was reportedly brutalized by men of the Nigerian police attached to a Lawmaker. His tyre was also reportedly busted by one of them before they left him.

Moses dropped the pictures and the video on Facebook and wrote : "And that was how I was molested, brutalized and manhandled by officers of the NPF on the instruction of one National Assembly Member this afternoon at Awoyaya, Lagos. As if that was not enough, one of them shot my front tyre before they zoomed off.

It's time to make a statement. We both have equal rights of way on the road hence I will never be intimidated nor cowed by your act of trying to force me out of the road simply because you are on a convoy of another fellow Nigerian. I am a Taxpayer Mr. Man.

Not all Policemen behave like this ... Most of officers are still humane and friendly.
While replying to a question we found out that Moses further wrote : " My brother I was just driving on my own lane as a good Nigerian. All of a sudden these men overtook me and at a Commando style were ordering me out of my own lane because they were on a convoy. The next thing the men that were in a hurry suddenly double crossed me and then stopped, and for the fear of breaking my window glass I wound down. Then this guy slapped and pulled me out of my car which followed by the molestation."
Posted by Unknown
Labels: Crime