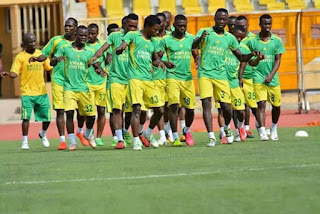 None of the players of newly promoted Kwara United have resumed for training ahead of the 2018/ 2019 Nigeria Professional Football League (NPFL) season, SportingLife reports.
Sources close to the Ilorin-based outfit informed SportingLife that the players failure to resume training was due to the inability of the management board to fulfilled their promises to the players at the end of last season.
“The players entitlement include outstanding match bonuses and sign on fee.
Considering the fact that the league is by the corner, this development may affects the preparation of the club.
“In fact most of the premiership clubs have started preparation except Kwara United.
“What makes it difficult for the club is the fact that they just got promoted to the elite division and if they don’t want to return to where they are coming from something urgent needs to be done as fast as possible,” the source who did not want his name in print said.
When contacted, Media Officer of the club, Wahab Bibire said the management is on top of the situation.
Posted by Cheta Igbokwe
Labels: Sports