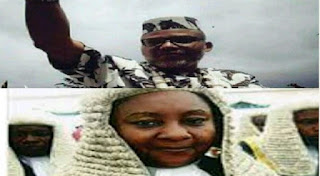 Justice Binta Nyako of an Abuja Federal High Court has threatened to withdraw from the ongoing trial of Nnamdi Kanu, leader of the Indigenous People of Biafra, IPOB.

Speaking during today’s trial, the trial judge predicated her threat on what she described as attempts by the defense to frustrate her.

Justice Nyako’s warning came, following series of arguments between herself and counsels to the IPOB leader.

The argument ensued when Ejiofor was speaking on a motion he planned to bring before the court, but whose content had not been listed by the judge.

The judge, while reacting to an application by Kanu’s lawyer, Ifeanyi Ejiofor, said she had been pushed to the brink by the defendant’s counsel and would recuse herself.

“If you don’t want me to continue in this matter, I will recuse myself.
“I told you that the matter is not yet before me,” said Nyako while stressing that the defendants were making the matter difficult.
Posted by Unknown
Labels: IPOB, News